Marunda Port in North Jakarta is being contested. PT Kawasan Berikat Nusantara (KBN) wanted to take over the port from its subsidiary PT Karya Cipta Nusantara (KCN). This State-Owned Enterprise (SOE) even dragged the Transportation Ministry represented by Marunda Port Authority Office to the court.

KBN is suing the ministry related to the granting of the 70-year concession to KCN in Marunda Port. It demands the KCN to stop all existing port terminal operations and the construction of some of its projects. KBN also requests compensation worth Rp 1.5 trillion.

As the sued party, the Transportation Ministry along with KCN and Karya Teknik Utama (KTU) lost the trial at the North Jakarta District Court. KBN’s victory was also strengthened by the Jakarta High Court’s decision on appeal. The ministry and KCN are likely to have to pay Rp 773 billion and hand over the management of the Marunda Port to KBN.

The case has not been legally binding and is being tried at the Court of Cassation. The Supreme Court (MA) Chief of Law and Public Relations Abdullah said that the appeal file had been submitted and would be processed immediately. “God willing. Hopefully, there will be a decision in the next three months,” he said recently.

According to the Maritime Law Expert Chandra Motik, the Transportation Ministry is a victim of internal problems between KBN and KCN. He said the lawsuit from KBN as a state company to the ministry was misdirected and unusual because it means the state sues the state.

There needs to be internal dialogue before a legal decision is made at the Supreme Court. If not, this case will disrupt the investment climate in Indonesia. KTU, as an investor, has invested Rp 3.4 trillion from the total plan of Rp 5 trillion for the development of Marunda Port. “At this rate, people can become lazy in investing in Indonesia,” Chandra wrote in a statement (8/15).

About 16 years ago, the central government and the Jakarta Provincial Government planned to build a port around the bonded zone. However, the government does not want any state budget to come out for this project. In 2004, KBN held an auction to private parties interested in working on this project, and KTU was the winner. The two companies then inked an agreement.

Around 2006, they established a joint venture called KCN to build and manage Marunda Port. Without issuing funds, KBN received a 15 percent stake in the joint venture. KBN was only tasked with taking care of licensing and providing 1700 meters of KBN land on the shoreline as a port facility. Meanwhile, KTU was in charge of all development costs and initial capital for KCN. That is why KTU controlled 85 percent shares.

“KBN has to take care of licensing. After obtaining permission, KCN was given two years to build each pier. There are three piers, so all must be completed in six years,” KCN President Director Widodo Setiyadi told Katadata.co.id recently.

However, the port construction was delayed because KBN cannot complete the task of processing permits. The development began four years later. In July 2012, KCN started to operate Pier 1, even though the construction of this terminal has only reached 50 percent. Problems arose when the replacement of KBN director took place the same year as the initial operation of Marunda KCN Port. Satar Taba became the new President Director of KBN, replacing Raharjo.

Satar wanted his company to be the majority shareholder in KCN, but KCN refused because the first principle of the port construction was not to use state funds. Long story short, KCN eventually agreed with him. The KBN-KTU agreement was changed in October 2014 to accommodate KBN’s wishes to get a 50.8 percent stake in KCN. KBN has to buy 35.8 percent of shares worth 256 billion, but it could not fulfill its obligation to deposit money after a year had passed.

It turned out that SOEs Minister Rini Soemarno, as one of the shareholders, did not approve the addition of KBN’s shares in KCN. The minister sent a letter to the KBN board of directors, demanding the cancellation of the KBN share capital deposit to KCN. The SOE Ministry's Deputy for Energy, Logistics, Zones, and Tourism Edwin Hidayat Abdullah signed the letter dated on January 25, 2016. The KBN and KTU shares in KCN were changed back to its initial composition of 15:85.

KBN and KCN issues continued. Widodo said that in the past six years, KBN had unilaterally blocked access four times for port construction project vehicles to go in and out of the port. “I have also been reported to the Corruption Crimes Police Unit [Tipikor], Corruption Eradication Commission [KPK], Attorney General's Office, and Supreme Audit Agency [BPK] for alleged corruption in the granting of the 70-year concession,” he said. 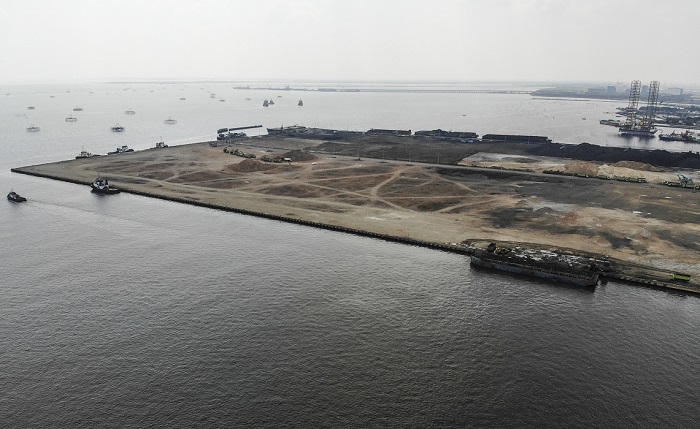