The selection committee for the antigraft body’s next commissioners still granted passage for troubled candidates in a series of selection stages.

The selection process for the next commissioners of the Corruption Eradication Commission (KPK) for the 2019-2023 period drew criticism. In several screening sessions, the selection committee (Pansel) still granted passage for troubled candidates. The committee seemed unable to receive input from the public and the antigraft body in this regard.

President Joko “Jokowi” Widodo appointed nine people as members of the selection committee last May, who then opened the registration session. About 192 out of 367 candidates passed the administration stage before being shortened to 104, 40, and eventually 20 candidates who qualify for the profile assessment stage.

A coalition of civil society organizations, which includes Indonesia Corruption Watch (ICW) and Gadjah Mada University’s Anti-Corruption Research Center (PUKAT), criticized the selection process due to many problems in its implementation.

The coalition also sent a petition to President Jokowi, which until now has been signed by 71,327 people. “President Jokowi should immediately ask the selection committee to reject candidates who have poor quality and integrity,” the coalition wrote in the petition on change.org, Friday (8/30).

Meanwhile, former KPK commissioners – Busyro Muqodas, Abraham Samad, Muhammad Yasin, and Bambang Widjojanto – said there is an attempt to weaken the antigraft body through the selection process. They asked President Jokowi to reject any troubled candidates.

They even see that the committee had not been able to accommodate input from the public. "Many still doubted the committee's commitment in choosing 10 KPK commissioner candidates," Busyro said.

According to KPK Spokesman Febri Diansyah, several candidates do have a poor track record, such as alleged acceptance of gratuities, non-compliance with submitting the wealth report (LHKPN), alleged ethical violations while working at the KPK, and allegations of carrying out actions that hinder the work of the antigraft body.

“Two [candidates] from the National Police and SOE have never reported their wealth,” Febri said on Friday (8/23).

Based on the news from mass media, three out of 20 candidates have problems similar to the information given by Febri. Antam Novambar once accused of intimidating former KPK law enforcement director Endang Tarsa. While still serving as the enforcement deputy at KPK, Inspector General Firli Bahuri was accused of having a meeting with graft suspects. A former prosecutor, M. Jasman Panjaitan, has been accused of receiving money from D.L. Sitorus, a defendant in forest logging case.

The committee had asked Antam and Firli about the allegations during the final selection, but they denied it. The Pansel Head Yenti Garnasih said the committee would request a commitment to submit the wealth report to the candidates after they were elected. The reason is that so far there have been no strict sanctions against LHKPN reporting and not all selected candidates are serving as state administrators.

Febri said the KPK had handed over the track record data of the candidates to the selection committee when there were only 40 candidates left. The data were also equipped with adequate facts and had a truth value, but troubled candidates still get a passage. The KPK also took the initiative to invite the committee to meet and discuss the data and its supporting facts.

“The Corruption Eradication Commission submitted a soft copy of the letter to the secretariat of the selection committee today, as an invitation to see the evidence related to the track record data submitted last Friday,” Febri wrote in a statement on Wednesday (8/28).

However, Yenti unable to fulfill the invitation, which was planned to be held on Friday (8/30). “The committee cannot come as it has a pre-planned agenda with tight time,” she said at the State Secretariat Building in Central Jakarta, Thursday (8/29). The committee had confirmed its absence to the KPK.

Amid criticism toward the selection of KPK commissioner candidates, three figures who often criticized the matter were reported to the Metro Jaya Regional Police. KPK Spokesman Febri Diansyah, Head of the Indonesian Legal Aid Institute Foundation (YLBHI) Asfinawati, and ICW Coordinator Adnan Topan Husodo were reported for allegedly spreading false news from May to August 2019.

Youth for KPK Escort and the People of Jakarta were said to be victims of the false news. A South Jakarta resident named Agung Zulianto, who claimed to be a student, made the report to the police.

ICW Political Corruption Division Coordinator Donal Fariz said the report was a backlash from parties that have personal interests. The aim is to secure the selection committee and some candidates from civil society criticism. “The reason is that YLBHI, ICW, and other civil society coalitions have been escorting the candidate selection since April 2019,” he wrote in a statement on Wednesday (8/28).

The coalition found indications of efforts to weaken the KPK starting from the appointment of the committee members to the candidate selection. The efforts to criminalize the critics are then used to counter the criticism. According to Donald, this is like a rematch of gecko (KPK) versus Crocodile (Police), which also happened a few years ago.

There are at least four indicators that the criminal report is a form of counterattack to weaken the KPK. First, the report is made in connection with the criticism against the selection committee and some candidates. Second, the story is being told for events that had occurred a few months earlier. Third, it is an unclear and very vague report. Fourth, it is fabricated, not based on facts and sufficient evidence. 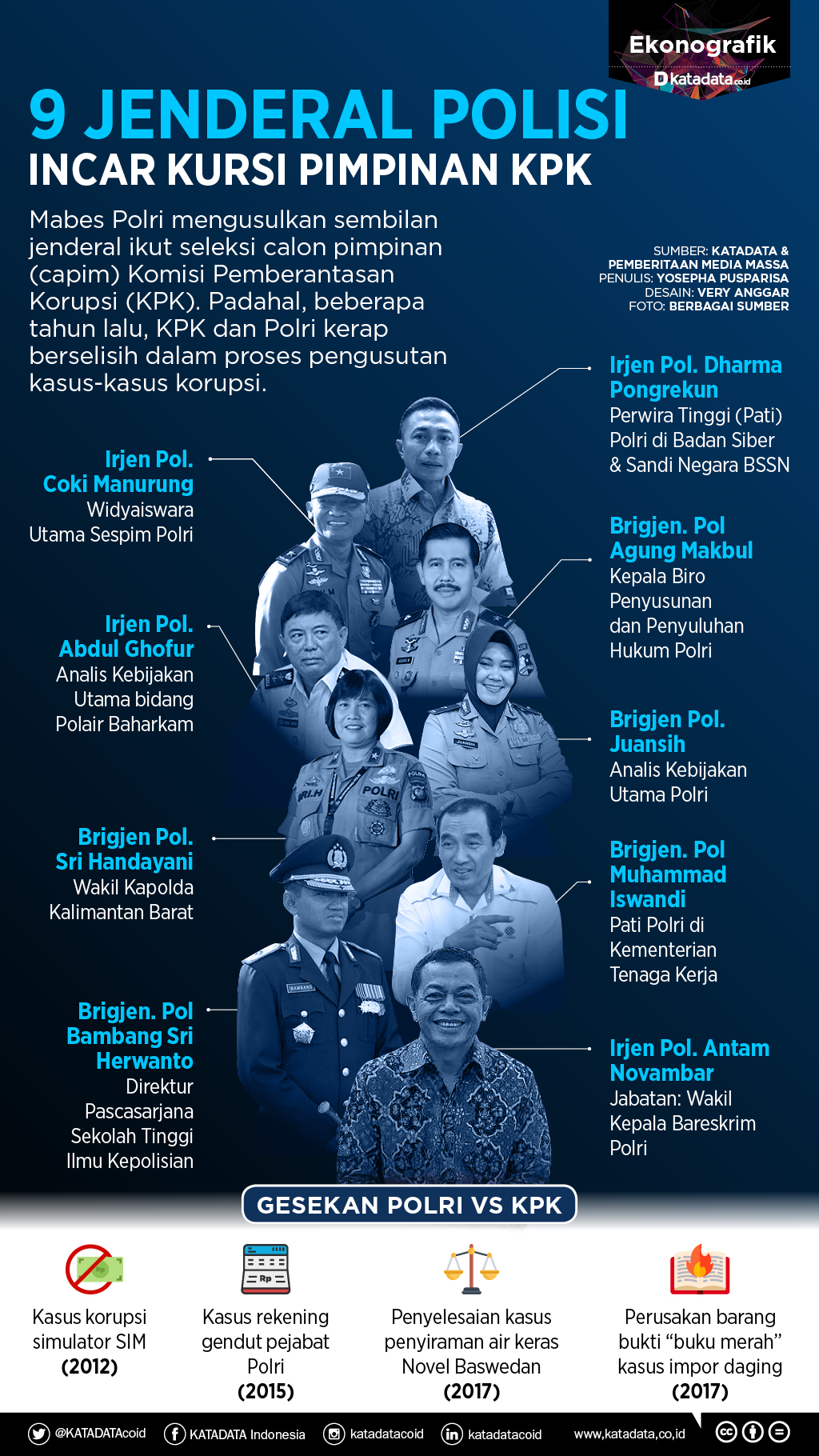 KPK Escort Coalition also questioned three committee members - Hendardi, Indriyanto Seno Adji, and Yenti Garnasih - who were appointed by Jokowi. They were accused of having a conflict of interest.

Yenti is said to have served as an expert staff to the Head of the Police Education Institute for Criminal Investigation Department (Bareskrim), National Narcotics Agency (BNN), and Law and Human Rights Ministry. She is a legal expert, particularly Law on Money Laundering (TPPU). Yenti was even dubbed as the first TPPU doctor in Indonesia. She was also a member of the KPK selection committee in 2015

Hendardi is still serving as an expert advisor to the police chief since the leadership of General Badrodin Haiti. He now works as an advisor to the National Police Chief General Tito Karnavian in the field of human rights. Hendardi briefly joined a joint team that investigates the attack on the KPK investigator Novel Baswedan, which was formed by Tito in early 2019. The team’s performance was also criticized as it was deemed not independent.

Meanwhile, Indriyanto is known as a criminal law expert who has long been in contact with the KPK. In 2015, President Jokowi appointed him as one of the acting heads for KPK together with Taufiqurachman Ruki and Johan Budi.

The KPK had involved Indriyanto as an expert in many studies, including the validity of the House of Representatives’ special inquiry committee which became a polemic in 2017. Meanwhile, Yenti had been a member of the KPK selection committee team in the previous period. She was also listed as the lawyer of President Soeharto in a lawsuit against Time Asia magazine for the May 24, 1999 issue.

The ten names will be submitted to President Jokowi for public announcement and then forwarded to the House of Representatives (DPR) for the fit and proper test. From the ten names, the DPR will choose five of them as the new KPK commissioners for the term of 2019-2023.